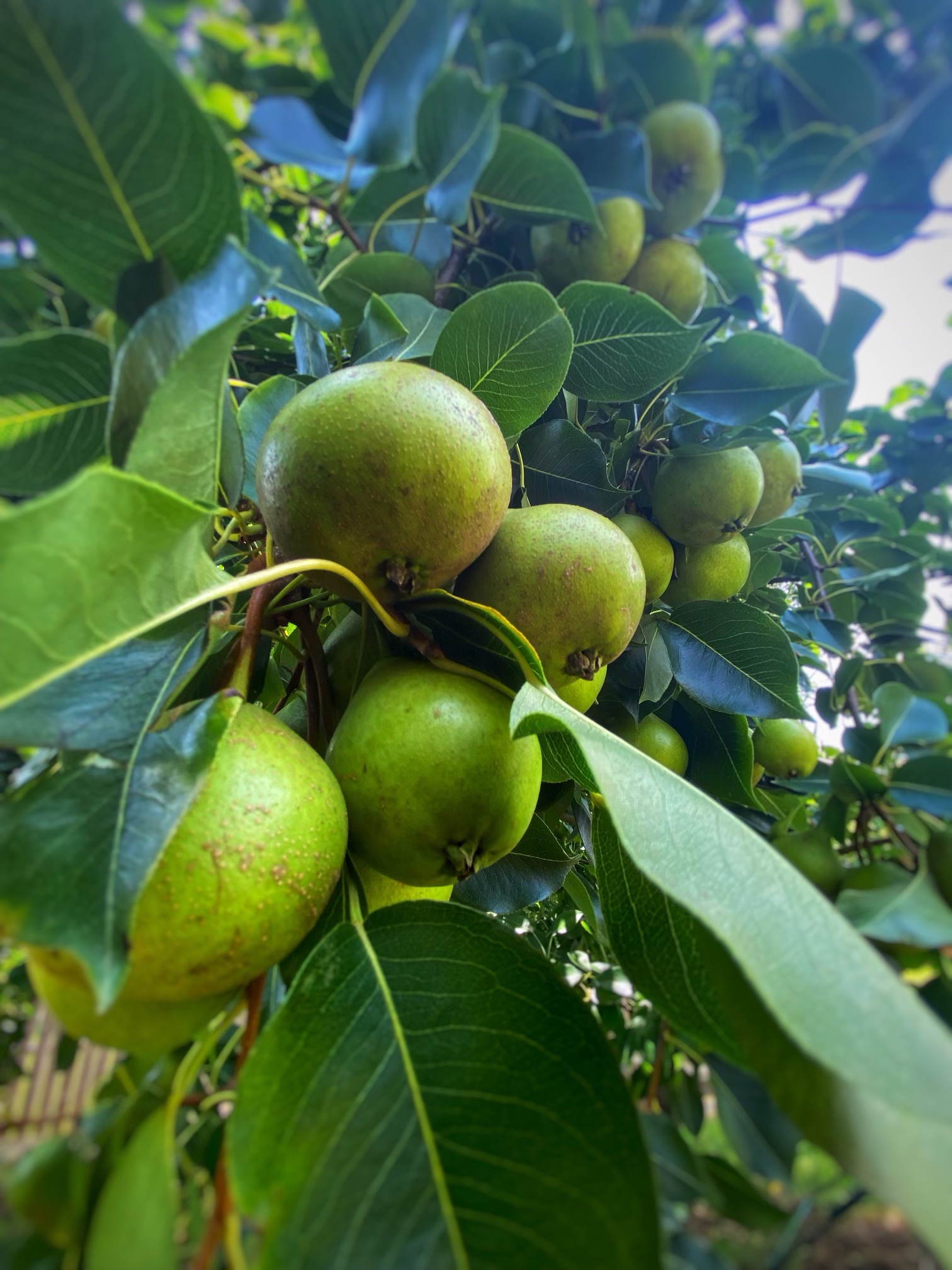 The other day, I had the privilege of working with Bekah in the garden. We were weeding the blackberries and picking the first few ripe berries. Bekah said, “I hope we have a good crop, because I like fruit waaay more than vegetables.”

Being much older, I probably like vegetables considerably more than Bekah does, but I agree with her that fruit is delicious—which probably contributes to my passion for trees. It’s a good day when I can be out at the pond watering, weeding, or pruning. I can finally say I like pruning, but that wasn’t always the case. For years, I avoided it, and that presented a problem.

So, here’s my story. It’s a journey of human stupidity and God’s kindness—sprinkled with a generous sense humor.

We bought our home in Bedford from a woman who worked in a nursery. The house had great trees. There was a massive Live Oak in the front yard, a beautiful flowering ornamental pear on the side, and a banana tree in the back. It didn’t take long for us to mess up this paradise. First, there was the Weed and Feed sprayed on the lawn that killed anything with broad leaves.  Who knew that’s exactly what a banana tree has? Then, there was the mystery of how and when to water, fertilize, and prune. With a full-time job and a young family, I didn’t take the time to learn, and the trees were weakened. Last, there was the borer infestation that wiped out a good number of trees in our neighborhood. I needed to replant.

A logical person might research and plan, but I had not really learned much from my mistakes. I really love fresh fruit, so when spring came and there were fruit trees at Costco, I picked up several. Literally. I picked the trees up by the trunk, threw them in my cart, hauled them home in my mini-SUV, and my husband put them in holes in the backyard – two peach trees, two pear trees, and two apple trees. Not too scientific, but that’s where I was at.

That first year was glorious. Now that I know better, I am amazed by the success. You could call it beginner’s luck, but I see it as God’s compassion. I picked a large basket of peaches off two trees that weren’t wider around than a quarter. The next year, there were hundreds of peaches and pears. All the trees grew with minimal care for years.

I offered excess produce to friends and neighbors, which was lots of fun. But the subject of pruning inevitably came up, which was not fun at all.  A part of me just wanted to see how big the trees could get and how much fruit they could yield. It was fascinating. Not smart, but fascinating. In time, the branches overloaded, and the limbs started to break. My yard was littered with ladders and step stools holding up branches loaded with fruit. I even used bungee cord to keep a few limbs from snapping. I had to learn how to prune, but it was a little late, because disease had set in.

Since then, I have sought help from online courses and arborists. I prune back fruit and limbs. I have learned that more is not really more. A pruned tree is stronger, bears larger and bigger fruit, and has a better chance of survival. Yet, there is one part of pruning I always struggle with, that’s included bark. It’s easy to trim away dead limbs and to cut away branches that crisscross, but it’s HARD to cut away what looks like a strong and healthy branch. When a branch forks, the connection can sometimes look more like a “V” than a “U.” Bark can cover this “V” which keeps you from seeing what’s underneath. This branch is really two separate branches covered with bark. It is a weak attachment which can break easily. It’s best to cut it back. It looks healthy, but it’s not.

My weak attachments are the things I think are a part of me, but in reality, they are not. They are part of my flesh, that is, my old self before I accepted salvation through Jesus. Pride, ego, hurt feelings, anger, envy, unrealistic expectations . . .  These aren’t me—not the part of me that is spirit. In fact, weak attachments are unbelief. How does a believer practice unbelief?

For me, one example is unrealistic expectations, and all the emotions that go with losing my peace. When I do this, I am actually believing my feelings—not God. He says I am fearfully and wonderfully made. His Word declares that God is good and just, and there is purpose in all things. Yet in those moments of doubt, what I can see and feel is more real to me than what God has said.  I haven’t died.  John 12:24 says, “Verily, verily, I say unto you, except a corn of wheat fall into the ground and die, it abideth alone. But if it die, it bringeth forth much fruit.” Paul talks about the death of the flesh in 1 Corinthians 15:31 where he says that he dies daily. Dying to the flesh is like lopping off a branch with an unhealthy union—one that’s just covered over with bark. That branch does not honor God, nor does it show gratitude for all He’s done.

If I cannot save myself from sin, then I cannot save myself from the flesh either. Thankfully, we are not alone. God is our Friend, and He will not leave us or forsake us. He is willing and able to teach us through most anything. I have learned very little through success but quite a bit through failure—if I ask. I did not learn very much about trees when the fruit effortlessly appeared. I learned an awful lot when trees died and crops failed.

Bekah is right. Fruit really is so much better than vegetables. And if we want to honor God and bear fruit in life, we need courage and grace to lop off the weak attachments.