HomeAround the Supper Table #60 – Because God Said So
Our Blog 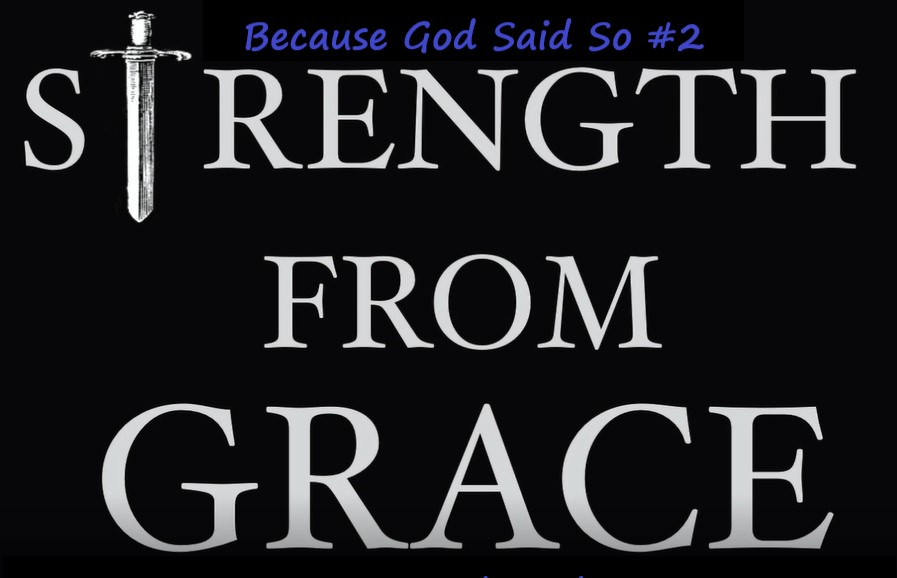 Welcome back to Strength from Grace a podcast for the young warrior. I’m Michaela Riggins, and as always I’d like to say thank you to Sanctuary Family Farms for supporting me.  Again, you can find a link to all of their awesome projects and more on my Facebook page: StrengthFromGrace412.  This week we also have a special spotlight for Anna Felix of felixxdesign.  She makes some amazing faith-based products, and I will leave a link to her Etsy shop on my Facebook page.

When I was little, my favorite way to pass time with my parents whenever I was told, “No” was what I like to call the, “Because I Said so Game.”  Now, you can already see where this is going, but picture this.  Six-year-old me in the middle of the store with eyes wide for my new found obsession.   Let me tell you, she was beauty.  She was grace.  She even came with her own batteries! She was Butterscotch, the pony.

“Because, it’s too expensive.”

“Because, you won’t play with it enough.”

“Yes, I will.  Why can’t I have it for birthday AND Christmas?”

Now eventually, we did settle, and get me Biscuit, the puppy and I eventually forgot all about Butterscotch . . . at least for the most part.  But one thing that has always stuck with me was his final answer as to why I couldn’t have Butterscotch was, because he said so.  I don’t know about you, but when I was younger, “Because I said so” was not a sufficient answer.  I knew that he had to be saying no for a reason, but he sure wasn’t letting me in on the secret.

As I’ve grown older, I’ve come to realize that this need to know why, was my own version of control.  I wanted to understand the ins and outs of everything, especially when I was making a decision – just so I would know exactly what I was getting myself into.

Originally this never caused any issues for me, until I was in junior high.  I, for one, am sensing a pattern to my early struggles.  As I said in our last episode, I was in a really dark place in junior high.  This, in part, was a result of who I was surrounding myself with.  Let’s face it.  Junior high girls are brutal.  Every single day, I was singled out for things that either I couldn’t control or were a part of my faith.  Pa and I would go back and forth and then round and round about when I was going to leave those girls.  Rationally, leaving would have been the smart thing for me to do, but I was so invested in what these girls thought of me, that my identity came from whatever relationship we had.

I couldn’t leave my identity.  If I could just wait it out, eventually they would like me . . . right? If I could just change, then they would change, and everything would go back to the way it was before they were mean. I was wrong.  The longer I waited, the worse the girls became, and the worse the girls got, the further I sunk into that dark place.  I was broken, confused, and beyond disappointed. I felt like I was out of options, but I didn’t want to leave.  I knew that I couldn’t stay like this, though. Especially not while I was trying to grow and heal.

We know that part of healing included me leaving the people that continued to bring me back to my own negativity. Making that decision wasn’t easy, and I drug my feet as long as I possibly could until Pa and I sat down and finally said that enough was enough.  The girls weren’t going to get better.  I couldn’t change myself to be liked by them.  I was going to leave.  I prayed and asked for guidance.  I even asked that He change their hearts so that I wouldn’t have to leave, but at the end of the day, I wanted it to be His decision.

Whenever we leave a decision in God’s hands, it isn’t always easy.  Take Gideon for example.  When Gideon was told, by an angel of the Lord, that he was going to go to battle against the Midianites, he automatically questioned it saying, “Oh my Lord, where with shall I save Israel?” He wasn’t confident in his abilities by any means, but God told him that He would be with him.  Then, the angel of the Lord showed Gideon a sign so that he would REALLY know that he was talking with God.

This allowed Gideon to have the trust and confidence that he would need when God told him to tear down his father’s alter to Baal.  Now, this is where the hard part starts to come into us allowing God to make our decisions.  Can you imagine blatantly going against not only your father, but the entire city that you lived in?  That takes guts.  But it isn’t the type where we’re confident in ourselves.  We know this from Gideon’s own reluctancy to go to war.  You see, God told Gideon to not be afraid, because He would be with him and he would not die.  Gideon’s confidence wasn’t his own.  It was confidence in what God had told him to do.

When the city had seen what Gideon had done, they wanted him to die for his actions.  But God protected Gideon.  Now it’s easy to sit there and think, “Man, at this point Gideon’s obviously just going to go straight into the battle.”  But that’s the thing, again Gideon asked God for a sign that it was really Him.  So, Gideon took a fleece, placed it on the ground, and asked “God if this is really you, make the fleece wet, but the ground dry.” Gideon gets up the next morning, and it was done. The fleece was soaking wet to the point that he could wring out an entire bowl’s worth of water, but the ground was dry.  And it’s even easier to think that God must be getting frustrated with this guy, “Like I’ve sent you an angel, you watched your offering be engulfed in flames, I protected you from an entire city, and now I’ve made your fleece wet, but the ground dry . . . what else could you possibly ask for??”

So often we find ourselves falling into three lies that stop us from asking God what He wants us to do.

Before I decided to let God decide what I was going to do when it came to removing myself from the girls that had treated me so poorly, I thought that I could figure it out on my own.  I would change . . . and then they would change, and everything would be perfect again. But in Psalm 139:14 it says, “I will praise thee; for I am fearfully and wonderfully made: Marvelous are thy works; And that my soul knoweth right well.”  I know now that there was nothing that I could have done to make those girls like me.  God had already made me perfect in His own image.

As big as I thought everything going on was, I still thought that God couldn’t be bothered with whatever I wanted. Again, I couldn’t comprehend how He could love me enough to care about the pain that I was going through.  But in Psalm 34:19 it says, “’Many are the afflictions of the righteous: But the LORD delivereth him out of them all.” God cared more about me than I would ever know, but I had to willing to accept His guidance.

This brings me to the third lie that I believed.  God wasn’t going to give me an answer. In all honesty, that was an easy cop out for me, because I already knew what God had told me to do.  I wasn’t supposed to surround myself with those people, and it was past time for me to leave. But I was so afraid about what people would think about me and that I would be alone that when I thought that God wouldn’t give me an answer, it wasn’t that I really didn’t think He would tell me.  I didn’t want to know what His answer was.

The second that I gave the decision to God, I had to set aside what I wanted and focus solely on Him. Then, like Gideon, I asked God to give me a sign on when it was time.  This is called casting out a fleece.  Sound a little familiar?  I asked God that when the girls made fun of me for anything that had to do with my faith that He would give me the strength to get up and walk away.  And it happened.  The girls made their jokes, and I said, “That’s enough,” got up, and I sat by myself the rest of lunch.

Now believe me, it wasn’t like God was asking me to go into battle or anything like that, but He had asked me to turn away from something that I had been holding on to so desperately in fear of losing my identity.  Little did I know that the very next day, people who I had never considered friends would invite me to eat lunch with them.  His timing was perfect, and had I never allowed Him to guide me in that decision to leave, I very easily could have given into every little thing that these girls wanted.  And I wouldn’t have the confidence that I have now.

I want you to know that I understand how difficult it can be to make decisions. We may not have all of the answers we’re looking for.  We may feel rushed, and we may not even have a clue as to where to start.  But when we place our life and decisions in His hands, making decisions doesn’t have to be so scary.

Again, I’d like to say thank you to our regular sponsor, Sanctuary Family Farms and my family.  I hope you join me again on our next week’s episode and God bless.