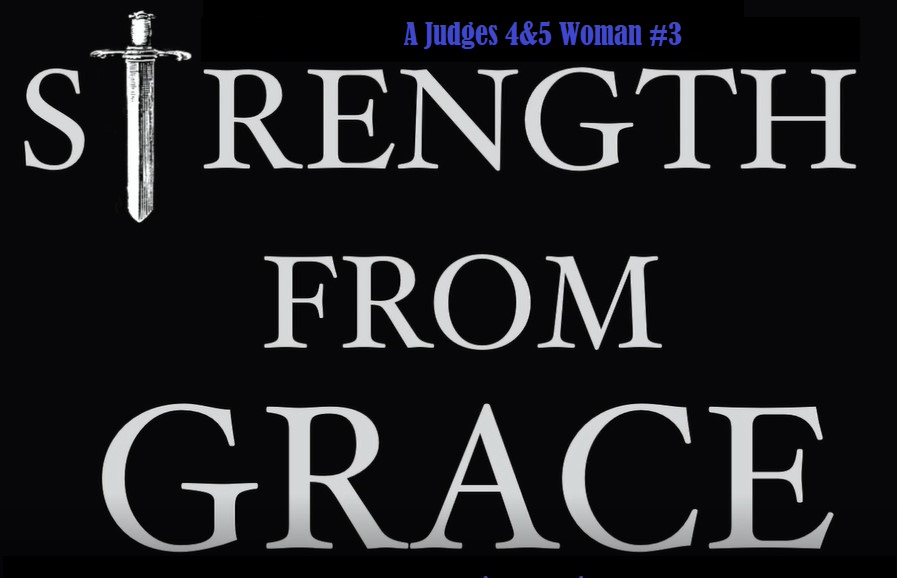 Below is the transcript from the latest podcast episode of Strength from Grace. If you’d rather watch the video, visit her Facebook page.

I saw this post the other day from another girl that said, “If you can’t handle me at my Judges 4-5, then you don’t deserve me at my Proverbs 31.” I instantly fell in love, because this was one of those jokes where if you know, you know.  Now don’t worry if you don’t know, because on today’s episode, we’re going to do a bit more Bible study than what we’re used to.  But I promise you’ll be up to speed in no time.

Welcome back to Strength from Grace, a podcast for the young warrior.  I’m Michaela Riggins. As always, I’d like to say thank you to Sanctuary Family Farms for supporting me and my ministry.  This week, I’d like to give a special shout out to Devon at Gospel Gear Co. Not only was she the absolute sweetest when it came to sorting me out with an amazing long sleeve with the lyrics to “Reckless Love” on it, but all of her other products are amazingly true. You can find a link to her awesome work on my Facebook page.

Now I’d like to start off in Proverbs 31.  This is the part of the joke that everyone seems to be a little bit more familiar with, and if you want to read along, I’ll start at verse 10. Starting with verse 10 it says,

“Who can find a virtuous woman? For her price is far above rubies. The heart of her husband doth safely trust in her, so that he shall have no need of spoil.  She will do him good and not evil, all the days of her life.

She seeketh wool and flax, and worketh willingly with her hands.  She is like the merchants’ ships; she bringeth her food from afar. She riseth also while it is yet night and giveth meat to her household and a portion to her maidens.

She considereth a field, and buyeth it.  With the fruit of her hands, she planteth a vineyard.  She girdeth her loins with strength, and strengtheneth her arms.  She perceiveth that her merchandise is good.

She is not afraid of the snow for her household.  For all her household are clothed with scarlet.  She maketh herself coverings of tapestry.  Her clothing is silk and purple.

Her husband is known in the gates.  When he sitteth among the elders of the land, she maketh fine linen and selleth it.  And delivereth girdles unto the merchant.

Strength and honor are her clothing, and she shall rejoice in time to come.  She openeth her mouth with wisdom, and in her tongue, is the law of kindness.  She looketh well to the ways of her household, and eateth not the bread of idleness.

Her children arise up and call her blessed.  Her husband also, and he praiseth her.

Many daughters have done virtuously, but thou excellest them all.  Favor is deceitful, and beauty is vain.  But a woman that feareth the LORD, she shall be praised.  Give her of the fruit of her hands, and let her own works praise her in the gates.”

Now let’s breakdown what a Proverbs 31 woman truly is.  Right off the bat, in verse 10, it describes this woman of God as being far more valuable than the price of rubies. So think about this, the International Gem Society quotes rubies as being “some of the most expensive gemstones, with record prices over $1,000,000 per carat.” And yes, I know that this is a metaphor, but I’d like to give you a little bit of a perspective of just how valuable a Proverbs 31 woman is.

So what is it that this woman does to make her so valuable?  First off, she is good to her husband.  As it says that she will do him good and not evil all the days of her life. And I know it’s easy to say, “DUH that’s her husband!” and I would agree with you; however, something that I’ve found myself to be guilty of in my own relationship is that I’ll be hypercritical of every little thing that he does.  Don’t get me wrong, ladies set the bar high, but be certain that it is based on Biblical principles and not whatever you find to be the picture-perfect life.

Secondly, she is hard working, and isn’t afraid to put her hands to work.  She is prepared to work while others sleep, and provides a portion to her maids.  She makes sure everyone in her house is taken care of either through food, clothing, or spiritual needs.

Later on it says, “She considereth a field, and buyeth it.”  This shows us that she takes her time while making decisions and plans. This woman isn’t impulsive.  This woman is strong.  She speaks of wisdom and kindness, and her family praises her.

Finally, she fears the Lord, and her praise comes from the fulfillment of her actions, not from the mouths of others.  What this means is that she doesn’t have to have the approval of others for her to know that these are the things that she needs to be doing, because she finds fulfillment in them.

Now that we understand who a Proverbs 31 woman is, I’d like to introduce you to a Judges 4 and 5 woman.  Buckle up, because it’s about to start making sense.  The women of Judges are all Proverbs 31 women, but they show us what we are capable of doing when we allow God to use us as instruments of his will.

In Judges 4 we’re introduced to Deborah and Barak. Deborah is a prophetess, and she calls for Barak telling him that God has called him to go to war against Sisera. Barak is apprehensive at first, so he tells Deborah, “I’ll go, but only if you will go with me.”  Deborah tells Barak, “Of course I’ll go with you, but this journey isn’t for your honor.  Because God will deliver Sisera into the hands of a woman.”

Automatically we’re introduced to two women (one of which we don’t know yet), who have very different purposes. Deborah was not only a prophetess, but she was also called and equipped to go into war with Barak. This other woman was set aside by God to defeat Sisera.

Barak and Deborah go to war, along with the other men who came with Barak.  In the process of battle, Sisera escapes. Later on, Sisera finds himself at the tent of Jael, the wife of Herber. Jael finds Sisera, and says to him, “Turn in to me and fear not.”  Now there was peace between Sisera and Herber; this gave him no reason to worry, so he did exactly that.  Once he was settled into the tent, he asked Jael for a little water.  Then she brings him a bottle of milk, and covers him. Sisera tells her that if anyone comes looking for him for her to say that he is not there.  Then he falls sleep. When Sisera was sound asleep, Jael took a spike of the tent, and drove it through Sisera’s temple, killing him.

Sisera being brought into the hands of Jael was entirely God orchestrated.  God brought Sisera to a place he felt safe.  He gave Jael the knowledge to know to give him a glass of milk so that he would get sleepy, and he gave her the strength and courage to drive the spike though his temple.

So often I find that women are afraid to be strong, and that there’s a misconception that the Proverbs 31 woman is someone who is meek and stays to the side.  But that’s the thing.  Proverbs 31 specifically says that the woman is strong!  I know how easy it can be to say, “I can’t do this,” “I can’t do that,” “It just isn’t who I am.”  But we have to stop putting limitations on what God can and cannot do. It doesn’t matter if you’re a man or a woman.  If God wants to use you, and you allow him, he will make you enough. Be bold in your faith, and your value and strength will be beyond measure.

Again I’d like to say thank you to our regular sponsor, Sanctuary Family Farms and my family. I hope you join me again on our next episode and God bless.