HomeAround the Supper Table #98 – Doing God’s Will
Our Blog 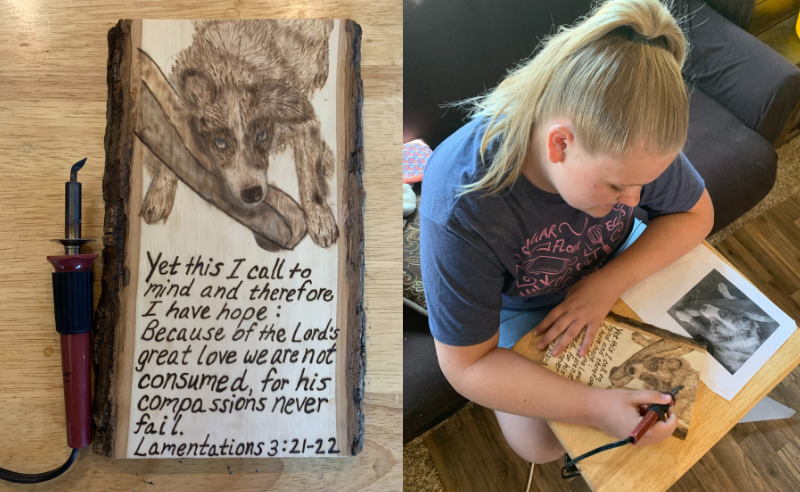 Hello, my name is Bekah, and I am 13 years old.  I spend most of my free time creating things and giving them away to other people.  I love to create designs with my scroll saw, build things out of wood, draw with my wood burner, and paint anything.  My family can usually expect a homemade gift from me for most celebrations. Creating these pieces of art is one of my favorite things to do.  So, one day I had an idea to do a project for some of our church friends. They are going through a difficult situation, and I thought they might enjoy something.  My first thought was that I could bring them joy with a project, and I could bring myself even more joy by creating it.  This really didn’t sit well with me when I thought more about it.  I knew that I shouldn’t just make it for my own sake, but more importantly I should have a reason and a purpose.  I didn’t want it to be about me and what I did. I really struggled with this and never started the project. A while later, God told me to make the project but that I needed to add a scripture from the Bible so that the focus would be about Him and His will. The project was to make a wood-burned picture of their dog and include a scripture.   I didn’t know exactly how I was going to do it, but God kept giving me ideas and help along the way.  Now that it is finished, it is much better than I would have done if God had not been with me.

The picture that I had to reference of their dog didn’t work out for the original idea that I had for the project. My idea was to burn a picture of their dog on the front of a piece of wood and burn the scripture on the back. But as I was working, I realized there was no way that was going to fit.  This was a struggle for me until God told me to do the picture of the dog on the top half and the scripture on the bottom half then to do it all on the front side.  God’s ideas are always better than my own ideas.

Throughout this whole project I just wanted to get it over with and put something down. I really struggled with using my own ideas and my own ways instead of relying on God’s plan, His ideas, and His peace.  Even though I struggled, I wanted to do God’s will. Occasionally, I would doubt if I was hearing God.  I would worry about what God wanted to say to our friends and if I was doing what God said. I also worried that I was doing what I wanted and what I thought they needed. I would often pray and ask God to show me what His words were, not my own. So, this is what God told me that filled me with peace and faith in Him. He told me it was not my will or what I wanted, but God’s will. He said that I am just the letter to send His message.  He reminded me that He is in control, and that this was His thing not mine. He also told me that it wasn’t about my artwork or woodburning. It was about God’s word and His message. He used my talent to speak to our friends and to hopefully bring them peace. This was not done fast. It took a lot of praying and asking for wisdom on what to do.

To finish up the project, all I had left to do was find a scripture. Finding a scripture was the most difficult part for me. I was so caught up in finding the perfect scripture that I would try to think of common verses that looked good on the wood but also sounded good.  I was worried and anxious that I wouldn’t choose the right one, and that I wouldn’t give God’s message that was specifically for our friends. I worried that it would be me and my flesh that would choose the scripture. I prayed and asked God to give me a scripture that was exactly what He wanted.  So, I took my Bible and let it plop open, and I began to read.  I picked out a scripture from my reading, but I really didn’t have peace about it.  I continued to pray and ask for guidance.  I even plopped my Bible open several more times.  Finally, I plopped my Bible open, and I was right back in the same chapter where I was the first time.  But this time, I heard a scripture that I had not realized before.  This scripture really spoke to me, and I knew that I had done God’s will and that was the message that God wanted to share.  The scripture came from Lamentations 3:21-22, “Yet this I call to mind and therefore I have hope: because of the Lord’s great love we are not consumed, for His compassions never fail.”

Throughout this whole process I really struggled with choosing to do God’s will and not my own.  I often wanted to do things that were easier for me, but God wanted me to focus on Him and be patient in Him. I know that my focus should always be on God and His will, because the truth is that I am just a mist just as it says in James 4:13-16, “Now listen, you who say, “Today or tomorrow we will go to this or that city, spend a year there, carry on business and make money.” Why, you do not even know what will happen tomorrow. What is your life? You are a mist that appears for a little while and then vanishes. Instead, you ought to say, “If it is the Lord’s will, we will live and do this or that.”

My goal is to seek God’s will and to have peace knowing that He directs my path.