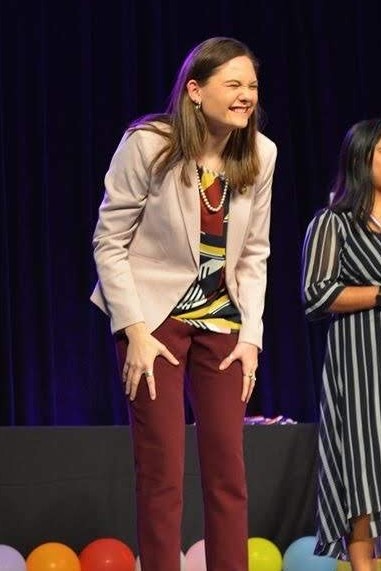 I spent all day anxiously checking my computer for results. It was funny to experience the rush and anticipation after nearly an entire year of not competing. I was so hopeful. I knew that I had given an amazing speech that I could compare to last year’s, and it had carried me all the way to being a state champion. Each hour my dread grew and grew with the lack of results until I had to leave for work. At that point, I just had to leave it, and let it be.

Now of course, I didn’t have any doubt that I would advance. I was already preparing for finals. I got off work and made a B line to my laptop filled with nothing but excitement. I scrolled through the events, and finally my results were posted. Slowly every ounce of excitement drained out of my feet. Michaela Riggins was nowhere to be found. I didn’t make finals, and I wasn’t going to nationals. The tears didn’t come until I had to tell Pa what had happened. We were all so excited, and it was suddenly all over. Believe me, this certainly wasn’t my first time to miss finals. Been there, done that. In the past, I spent days angry, disappointed, and confused asking myself what I had done wrong. I did the exact same thing when Nationals was cancelled, and I hadn’t even had the opportunity to mess up. News Flash – That was bogus! I wasted my time unhappy and questioning my value when the situation wasn’t what I wanted, but not one of God’s truths had changed!

One, I am fearfully and wonderfully made now, tomorrow, and even then! (Psalm 139) When I used to stock show, I would be so upset when I didn’t place as high as I wanted. I “felt” like if I had just done one thing differently, I would have done better. News Flash – They were judging the sheep, not me! Pa and I have come to the realization that my speaking events are absolutely no different. Yes, my judges are exactly like the sheep . . . dumb, but that isn’t my point. My events have always been 100% based on the opinions of my judges. I know, without a doubt, that I did my very best, and I gave a speech that I was proud of. So why should I place my value on the opinions of complete strangers when God, the guy that’s known me even before day one, has already said that I am fearfully and wonderfully made?

Two, this is entirely a part of God’s purpose. I absolutely would have loved to have made finals and then gone all the way to nationals, but that wasn’t God’s plan. And that’s okay. When God closes a door, He has something so much better in store for me. Personally, I think that had I made it to nationals, I would have let that define me rather than God’s purpose in my life.

Three, God has so much more in store for me. This chapter in my life is over now. There are parts that I rejoice about their departure and parts I’m going to really miss. That doesn’t mean that the best years of my life are gone. All it means is that I have something new ahead of me. I have no idea what’s in store for me or where I am going, but I know that God is going to be with me. All in all, I am so thankful that I had the opportunity to compete, and I’m thankful that it turned out the way it did. No, it isn’t what I originally wanted, but it’s God’s plan. I am reminded in Romans 8:28 that with God all things work together for the good of those that love Him and are called according to His purpose.