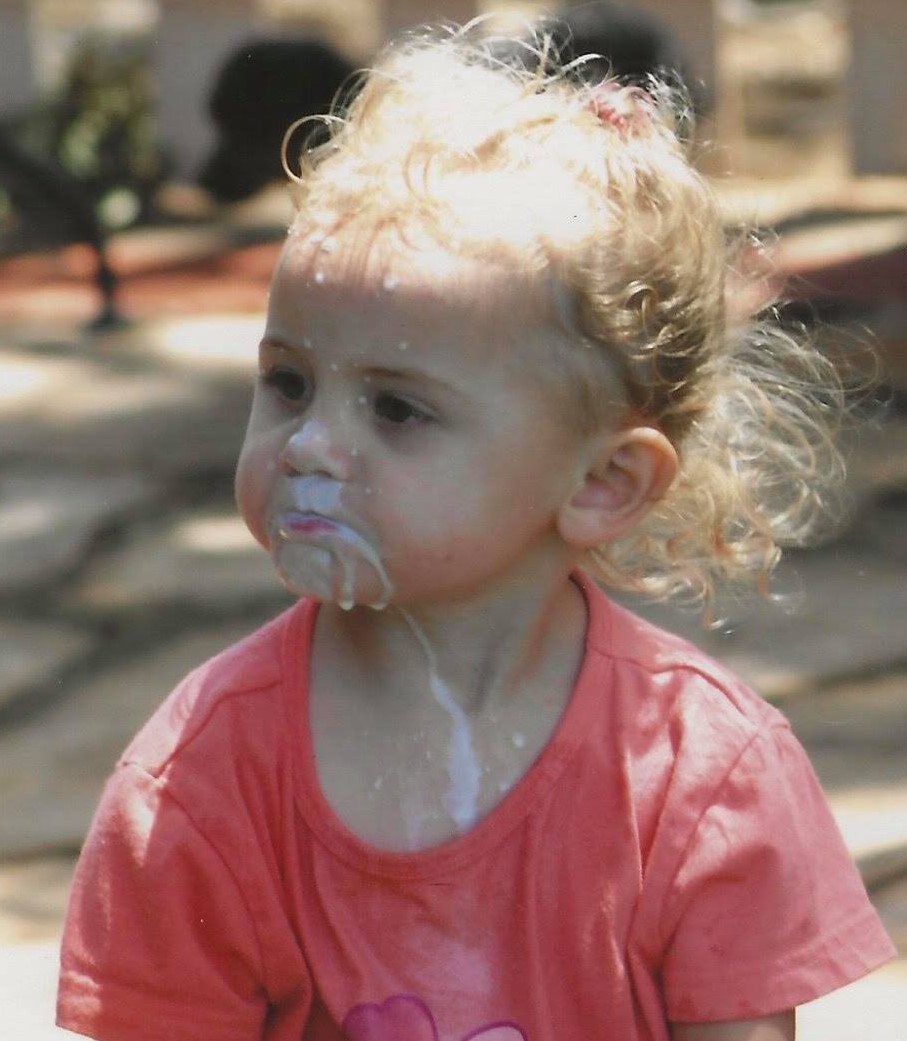 Fear, anxiety, self-consciousness, dread, and unhappiness – these are all words I find popping up in some of the best moments of my life. Nana has always documented every breath that one of us grandkids has taken through her endless albums, stacks, and flash drives of photos. In one album, you can find photos of me at some of my first family suppers “pretending” to be a water fountain by spitting milk as far as I could across the table in an attempt to gun down my uncles while my mom slowly died on the inside. In another album, there’s this little Easter memory we like to call, “Happy Keister.” (Yes, it is exactly what you are thinking.) Finally, there are countless photos of my earliest performances as the Mystical Michaela as I performed magic shows with cooperative, and not so cooperative, stuffed animals!

Now I know what you’re thinking, you sure didn’t seem like an unhappy kid, and definitely had confidence to spare. You’re exactly right. When I was younger, I didn’t have a care in the world. I was happy & silly, and as Pa puts it, a firefly. Then over time, I lost sight of that and began to grow more and more unhappy.

This was around the time that I was in elementary school. I was bullied for the first time and didn’t know what to think, but I knew what I felt. I was sad, lonely, and confused. This was a person that I had once thought was my closest friend, but she was now treating me like a doormat. Worst of all, no matter how poorly I was treated by that person, I was constantly seeking, what I thought at the time, was her kindness; but it was really approval. I had no respect for myself, and when I looked to God for help, it was always on my terms. So, I continued to carry this around with me.

Then Pa started to get sick. As young as I was, I never noticed it. He was always my funny, loving, and sometimes grumpy Pa. I don’t remember much about the day he had his surgery other than being in the car on the way to the hospital asking questions. I was only told that it wasn’t a big deal. We got to the hospital and went to see him before they took him back. Per usual, Pa was cracking some horribly inappropriate joke. For most eleven-year-olds a joke would have lifted the thickness of the air, but Pa could see it in my eyes . . . like he always does. I was still afraid. So, he prayed and promised me that everything was going to be okay. At the time, that was enough.

When we found out that Pa was going to need open heart surgery, I was so angry with God, because in my mind, He was breaking His promise to me. He told me that my Pa was going to be okay, and this wasn’t okay. That feeling never went away even after God miraculously healed him, and he was back home. I continued to live in this constant fear of him dying as if God had somehow crossed His fingers behind His back when He made that promise. I managed that fear by hugging Pa anytime I left him, because at least I would have said goodbye if something happened. That fear never went away.

I carried it with me all through junior high and into high school in different forms. In junior high, it was the fear of being completely alone . . . like so many of the girls teased. I was constantly bullied and began to feel as if I was useless and a complete waste of space. I prayed and prayed that the girls would change, and that the anxiety would go away. But neither happened. So, I chose to shut God out completely. I began to sink further and further into depression and worry until I finally allowed myself to go so low that the only way back up to the surface was with God. I allowed God into my life, and I slowly began to focus on the good that was around me. I grew so much from where I had been, but there was always something that was missing. I was still anxious and struggled with the fear that what God thought was best for me, in the end, would still leave me unhappy and afraid.

Then 2020 happened. My anxiety began to grow and grow, then I nearly lost my best friend. That night is the only time that has ever come close to the fear I felt the day I almost lost Pa or what I felt in junior high. I plopped open my Bible the night he was airlifted to the hospital, because at that point, I didn’t know what else to do. I just read looking for anything to give me some sense of comfort. Then God led me to Mark 10:9 “Therefore what God has joined together, let no one separate.” Through this scripture, God told me that he was going to be okay. I did everything I could to trust this. But with every trip to the emergency room, hospital stay, doctor’s appointment, and setback, I feared that once again God had crossed His fingers behind His back.

I continued to live in the anxiety I had carried from each event until recently when I decided that I had had enough. Over the years, I have been making myself miserable. You can say that it was everything that’s happened to me, but that brings me back to what I said early on – the best moments of my life. I think about everything that has happened in my life. It’s easy to blur the “good” and the “bad” when you take purpose from the equation. But when you bring purpose into your perspective, everything begins to change.

However, I don’t just focus on purpose. I constantly have to remind myself that what I am feeling is not truth. You see, throughout everything that has happened, I was so focused on the way I felt instead of what God had said. No matter what, my feelings outweighed God’s promises to me. I felt useless, but God says I am fearfully and WONDERFULLY made in Psalm 139. I felt angry because God had lied to me, but in Titus 1:2 it says, “In the hope of eternal life, which God, who DOES NOT lie, promised before the beginning of time.” I felt afraid, because I thought that God was going to take my best friend away from me, but He promised me that He would be okay.

It isn’t easy for me to allow myself to find peace, especially when either God’s timing isn’t my timing, or God’s plan isn’t my plan. I come back to the fear that I will be unhappy with what God has in store for me. But I must know that if I want to live a life with peace, I have to give up the feelings that I have been holding onto and focus on God and His truth. This includes that He will not lie, He will not die, and He will not fail ME. Through my relationship with God, my past doesn’t determine how content I am with life or how much light I give to others. It determines my focus and outlook on life.